Maniknagar – The Abode of Supreme Bliss

I undertook a pilgrimage in 2016. After my visits to Kurvapur and Gangapur, a divine call came. I had no knowledge about this great saint or his beautiful abode. Thanks to the internet and websites, I was on my way to Shri Sadguru Manik Prabhu Maharaj’s Maniknagar.

Upon visiting the Samsthan and paying respects to Shri Prabhu’s Sanjeevani Mahasamadhi, I had no words to express my feelings. I was stunned.  At the same time, I felt ignorant for I had no idea of this holy place.

Though I got to know about it late but the vibes of the place made me feel that I was not new. The visit churned a good amount of my spiritual knowledge. Looking at Shri Prabhu’s portrait I couldn’t figure out what to call him. I used to wonder…is he a Guru, Avadhoot or a King? Then with his grace I came to understand that he is ‘Avadhoota Chakravarty’ the King of Spiritual World.

Maniknagar is the only Datta-peetha that practices the tradition of guru-parampara. The present peethadipati of the illustrious legacy is Shri Dnyanraj Manik Prabhu Maharaj, who is undoubtedly a master for those seeking spiritual guidance. 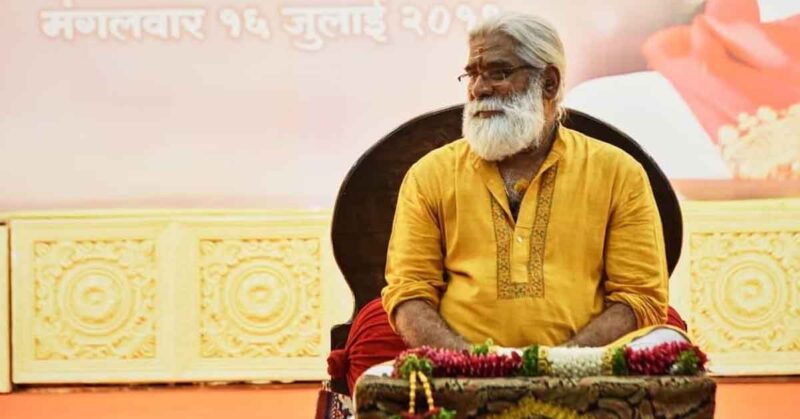 Shreeji’s study and knowledge about Advaita Philosophy is unparalleled. Not just that, the way he makes the toughest of topics look easy through his various lectures and pravachans is extraordinary. He is truly a living legend.

Yes, Shreeji breaks down complex subjects for us, but behind that is hours of patience, study and readings of scriptures, literature and books. When I attend or watch him speak, I think of a bee that collects nectar from right flowers and deposits it into a honeycomb. Remember, despite the tireless and selfless efforts, a bee never tastes honey, whereas it is the people [devotees and seekers] that do.

How fortunate the people of Maniknagar and surrounding areas would be who regularly visit Maniknagar and seek Shreeji’s blessings. I pray, Shri Prabhu’s message and Shreeji’s pravachans reach every corner of the world.

Note one thing, Maniknagar is that magnet which if attracts once will not leave you again. I feel blessed to have experienced that. I hope the place weaves magic on you too sooner than later.

My shastaang pranams to the holy lotus feet of Shri Prabhu. 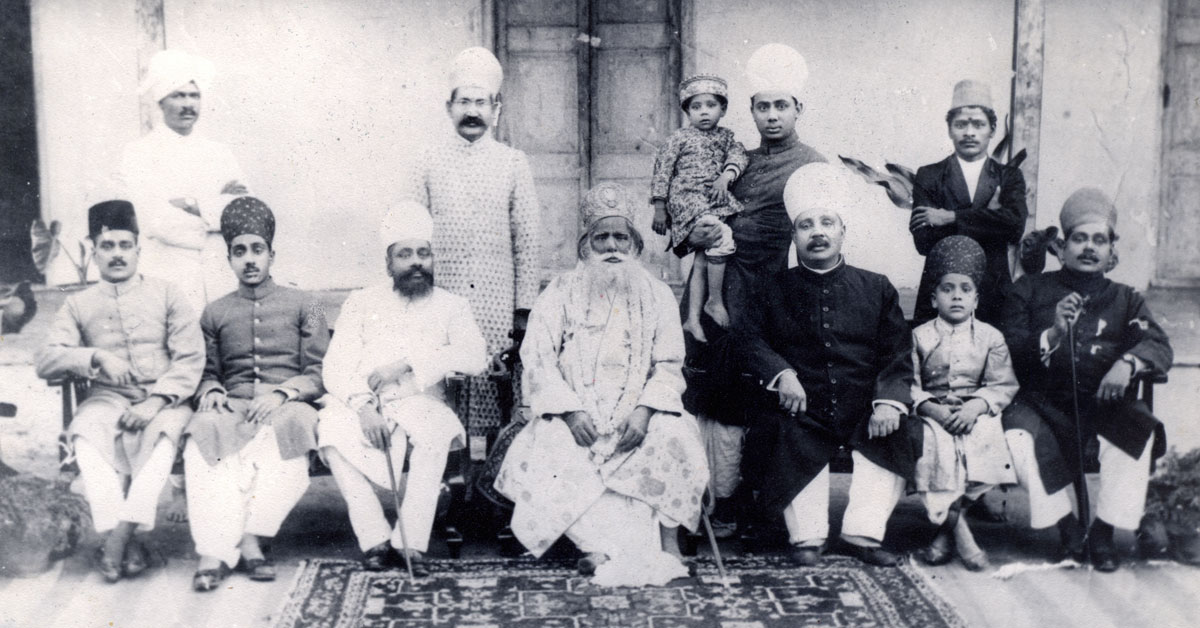 It was the Winter of 1927. Shri Martand Manik Prabhu Maharaj, the third Sakalamatacharya, was on his way back to Maniknagar after a long statewide tour. He was staying at Pratapbagh Haveli in the outskirts of Hyderabad. People were thronging to meet Shreeji. The Haveli and its compound were so full of people that even the Sadar Kotwal (Police Chief) – Sir Venkatramareddy had to wait in his car for hours before he could enter the compound. Suddenly, the telephone at the Haveli rang. The call was from King Kothi Palace. His Exalted Highness, the 7th Nizam had extended an invitation to Shreeji to come and bless him. Some people at the Haveli were anxious at the prospect of a Hindu saint visting the Muslim Prince. But Shreeji gladly accepted the invitation and asked Sir Kishan Pershad, the Diwan, to make arrangements for the visit. 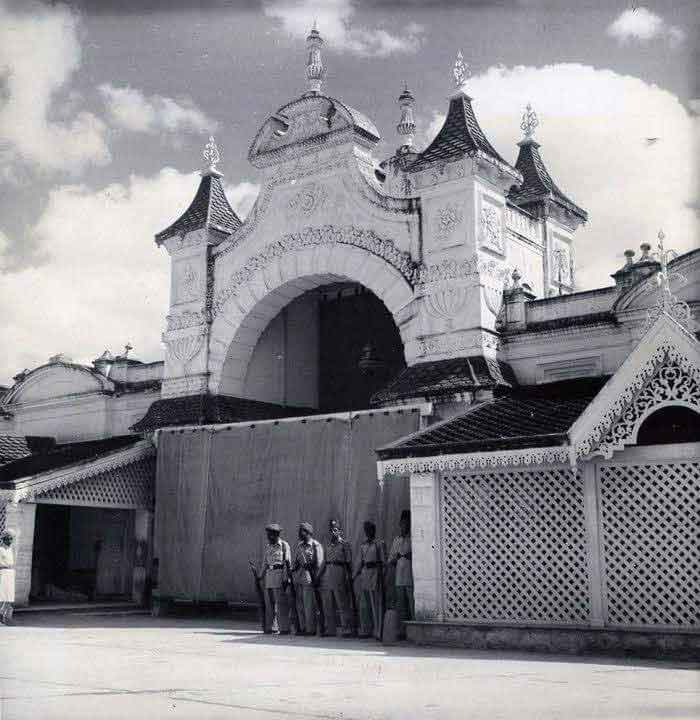 Due to Covid – 19 pandemic, we are introducing online purchase of Manik Darshan Calendar 2021. Those who wish to purchase can place an order in advance on or before 15th December 2020. The Calendar may or may not be available at the Samsthan’s counter during Jayanti Mahotsava 2020. 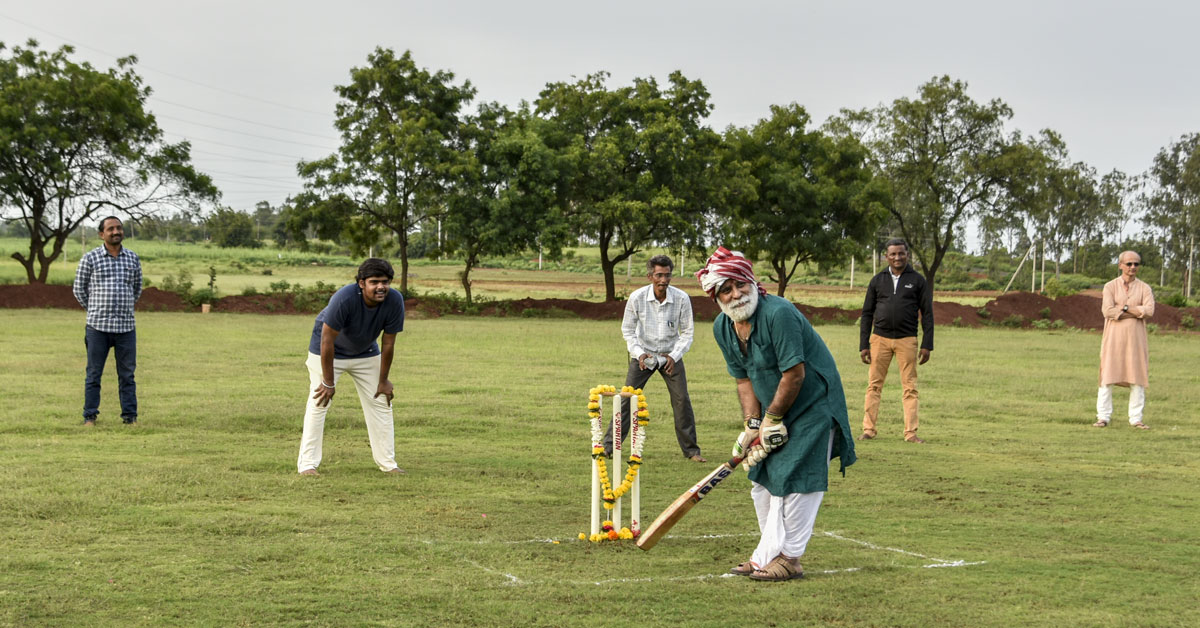 On the auspicious occasion of Anant Chaturdashi, Shreeji inaugurated the newly built Siddharaj Cricket Ground in the Manik Public School premises. Situated in a serene and picturesque surrounding, the SCG is a state-of-the-art turf cricket ground which has the potential to host Ranji Trophy and National-level cricket matches in future. It is also the first full-fledged cricketing facility in North-Karnataka approved by the KSCA. Considering the global pandemic, the inauguration ceremony was a very simple and modest affair. 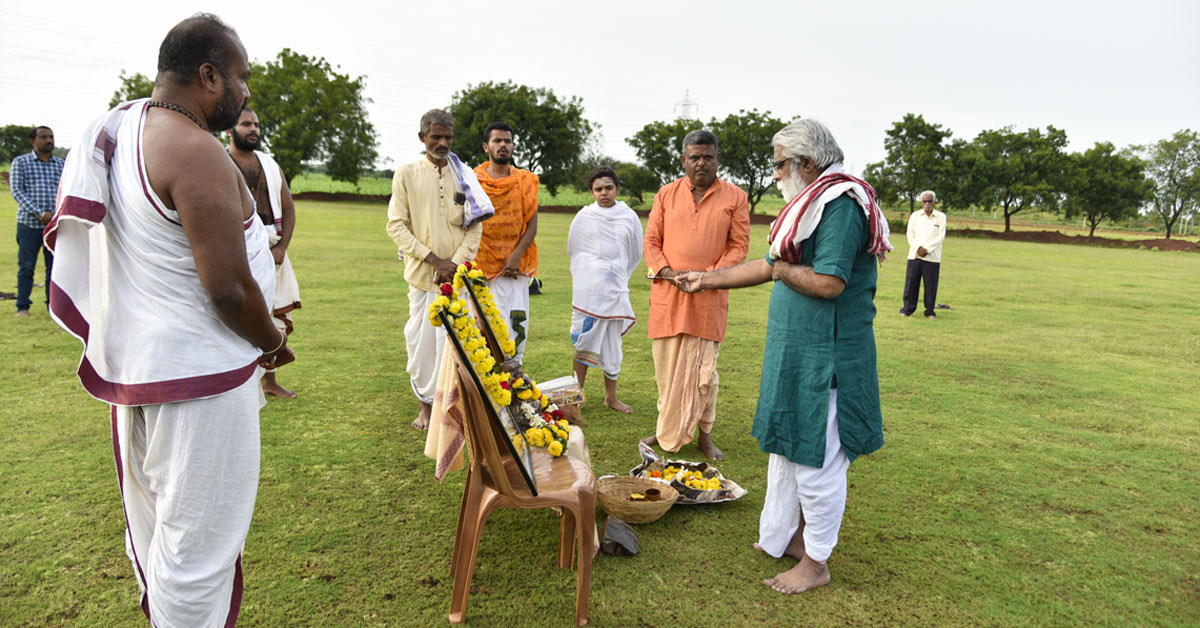 Veterans of Manik Prabhu Kreeda Mandal who had the fortune of playing cricket with His Holiness Shri Siddharaj Manik Prabhu Maharaj such as Shri G.H. Kankatkar, Shri V.G. Rotte, Shri Subhash Ravba and Shri Aravind Bhalkikar were present for the ceremony and played with Shreeji to mark the official opening. 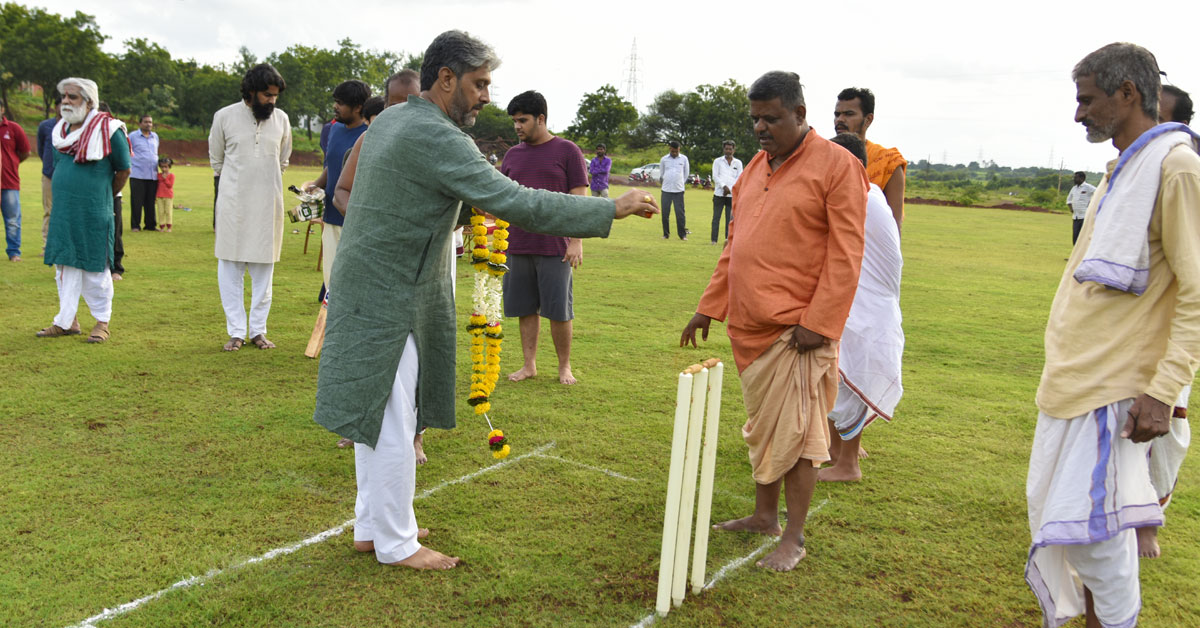 With the inauguration of the ground, preparations for the 11th Siddharaj Manik Prabhu Inter-State Cricket Tournament to be held from October 6th have begun. Principal and Staff of the Manik Public School, Ramesh Khadke, Ajay Chauhan, Kapil Bhalkikar, Bheemsen Sambrani and other senior members along with the present team of Manik Sports Academy were present. 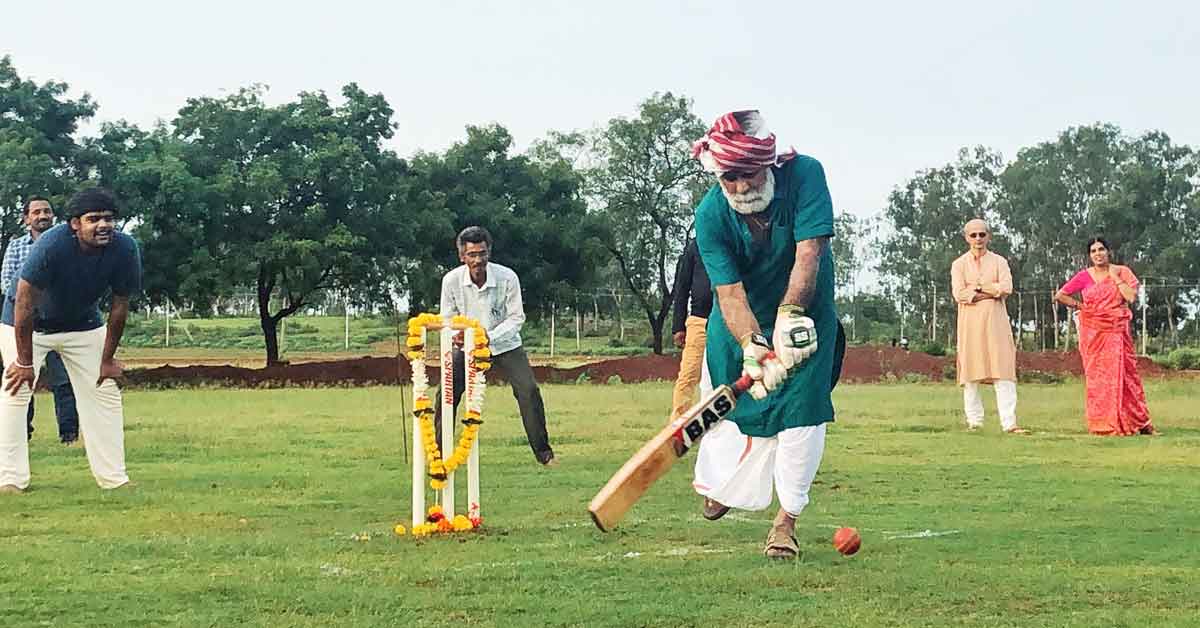 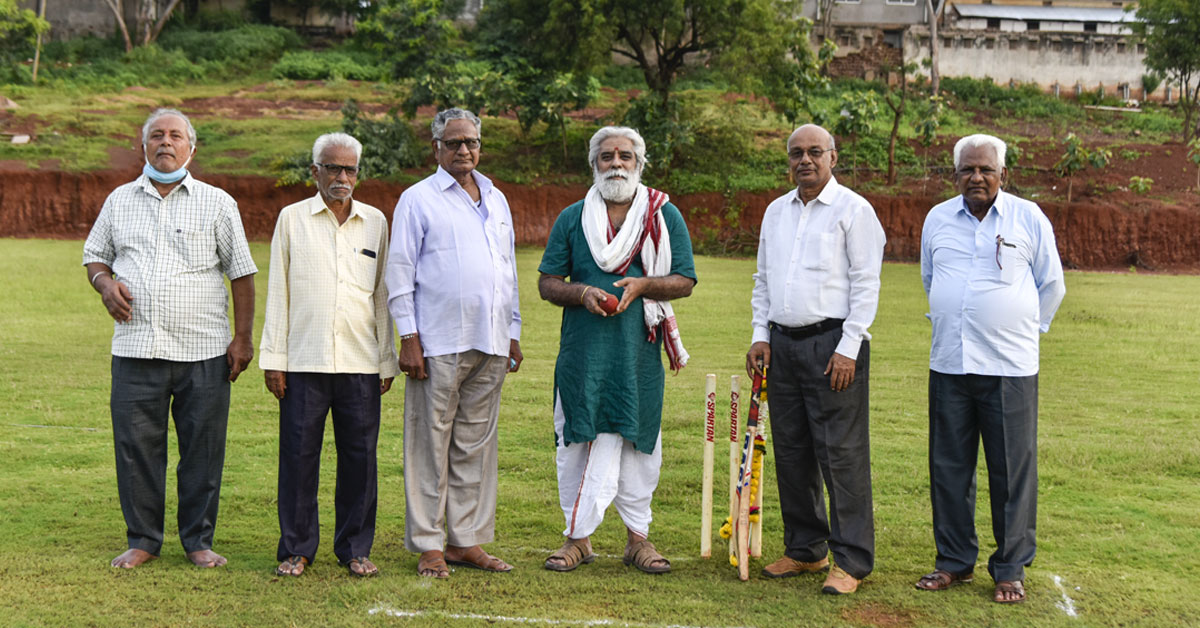 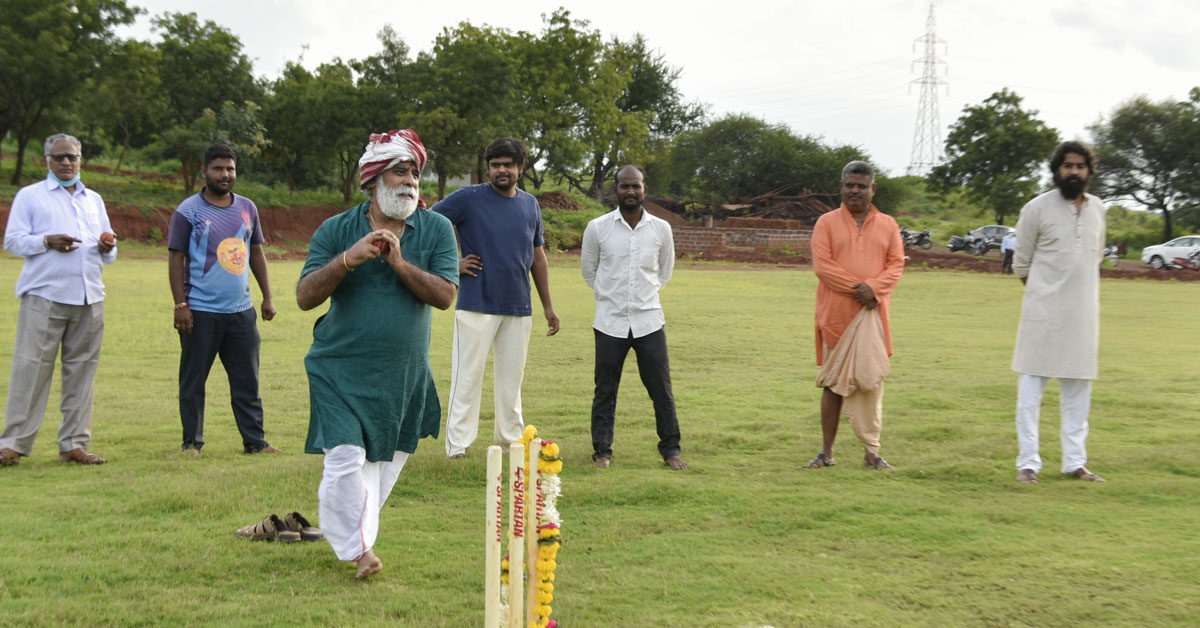 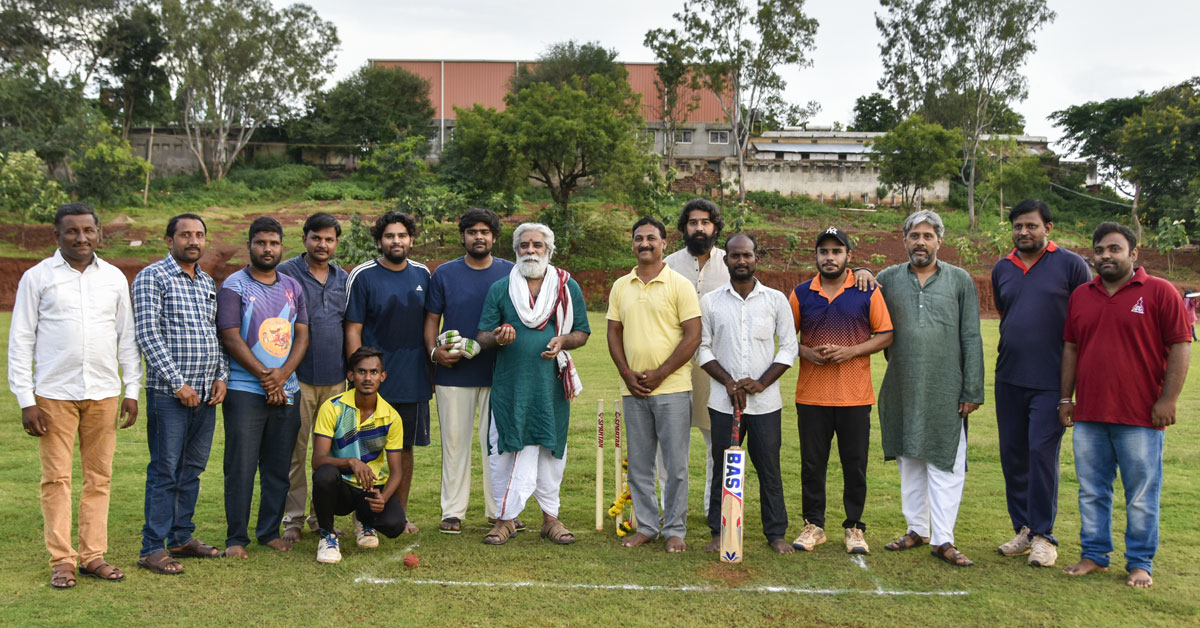 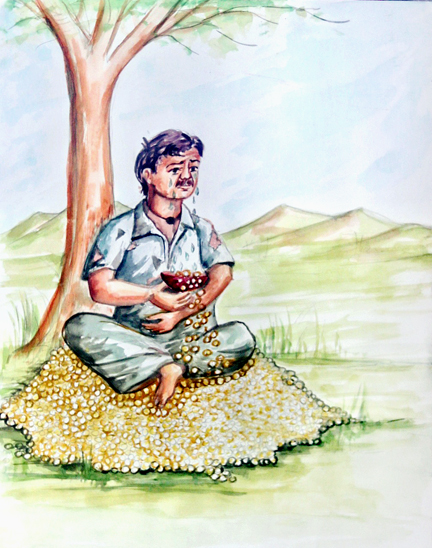 There was once a guru who had taught his shishya to be happy, always. Even though he had been poor, he never shed a tear, never was unhappy.

Understandably, people were jealous of this man. How could he be always happy? One of his friends, who was never happy to see him always happy, presented him with a ‘magic cup’ and told him that if he wept into the cup, his tears would turn into pearls.

That changed all. He started finding ways to make himself unhappy, so that his tears could make him rich. As the pearls piled up, so did his greed grow.

His guru, on his return from a pilgrimage, to his utter dismay, found his favourite shishya sitting on a mountain of pearls, weeping helplessly into the bowl. People also informed him that the man, in his desperate attempt to find ever new ways of being unhappy, had also murdered his own kin and wept his heart out so that he produced enough tears to add to the pile of pearls.

The guru, naturally, was greatly pained to hear all this. Ordering the shishya to get down from the mountain of pearls, he gave him a sound dressing down. ‘You are an idiot,’ roared the guru. ‘You could have enjoyed all this wealth without being unhappy. There was no need to shed real tears. You could have just kept on smelling onions. That would have served the purpose. There would be enough tears and lots of pearls. And, you would have remained the same ‘happy man’ that you were.

Only a true guru can give such an advice. To all of us, who, like the man who effortfully cried in order to produce pearls of tears, our sadguru – Shri Martand Manik Prabhu Maharaj, chastises in the sternest fashion – ‘बंध मुगति नहीं ब्रह्म तू साचा क्यों रोता रंडा’ (for you, neither is there bondage, nor liberation; then, why do you make yourself miserable, when YOU are verily the Brahman – the inexhaustible source of all happiness). Always forgetting that happiness is ‘intrinsic’ to our nature, we tend to find newer ways of being unhappy, shedding tears, in the greed that we may have pearls of material happiness.

How fortunate we are, to have a sadguru like Shri Martand Manik Prabhu Maharaj, who always comes to our rescue in our times of despair and dilemma, with a reassuring advise to treat the maya like an ornament and wear it gracefully without allowing it, instead, to become a noose around our neck – तव भूषण ही माया, तुज मंगल शुभ हो.

So, the next time someone presents you with a ‘magic cup’, just remember your guru, and, instead of shedding tears of grief, look for an onion peel. 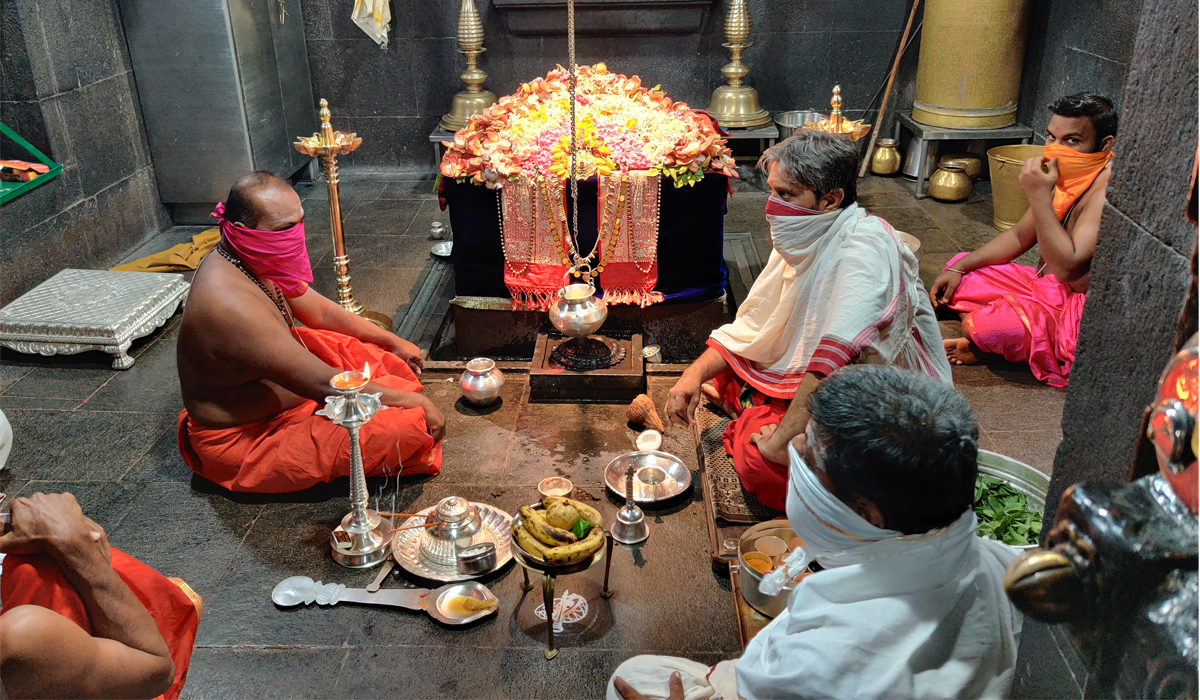